The news is out! We have a brand-new Kit Partner for the 2023 season.

Hummel has joined the Lashings family.

Hummel is a sporting institute; a household name that has been in the game of sport for almost 100 years. Equal to Lashings World, they honour camaraderie, celebrate wins and applaud passion on the cricket pitch.

Bursting with colour, our new playing shirts are more technically sophisticated than ever before whilst being bolder with a dynamic colour palette.

“We are beyond thrilled with our new playing kit. They reflect our excitement and individuality perfectly and we can’t wait to show them off at a cricket club near you very soon.”

The kit is technically astute thanks to Hummel’s innovation meaning the Lashings World XI squad is ready for play in all seasons, across all continents.

“Hummel UK is delighted to be appointed the official kit supplier to the cricket institution that is Lashings world XI. Hummel’s mission is to Change the World through Sport and this moving into the world of cricket with such a respected partner is another giant leap towards that goal.”

As the cricket season comes to its natural close the Squad are looking forward to March 2023 where the Internationals will host a Cricket Festival in La Manga, Spain. A Lashings first. 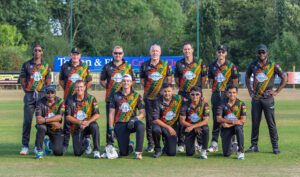